Why the Challenger Exploded

An aristocrat was riding down the street in his carriage. He ran over my father.

After the ceremony I walked back to the city. I was trying to think of the reason my father had died. Then I remembered: he was run over by a carriage.

Barthelme is playing with the two meanings of “why.” The son is wondering “or what purpose did my father die?” or “what moral imperative does his death serve?” or “how does the world benefit from his death?” But the answer he comes up with serves the OTHER meaning of “why.” He died BECAUSE a carriage ran over him. Not “what was the purpose?” but “what was the cause?”

In “Why Challenger Exploded” we explore a different ambiguity to questions of “why.” At what point in a long causal chain do we isolate a single CAUSE and identify it as the explanation for “WHY” something happened?

In January, 1986, the solid booster rockets that were to launch NASA’s space shuttle Challenger into orbit suffered a catastrophic failure 73 seconds into the launch. All seven crew were killed in the disaster, most likely from the impact of their cabin striking the ocean below. The weather in Florida was very cold; ice had formed on the launch pad overnight, but the launch proceeded despite the known risk of low ambient temperatures, partly because of public interest in this particular launch. For the first time, a non-astronaut—”ordinary citizen” Christa McAuliffe—was a member of a shuttle crew. The nation was riveted.

The launch, most uncommonly, was broadcast live on TV. Millions of schoolkids watched as the events unfolded, including McAuliffe’s students, gathered in their classroom to celebrate their teacher’s accomplishment. For 72 seconds, they were jubilant, but then an explosion separated the boosters from the shuttle and the launch catastrophically failed.

The immediate cause of the explosion was the failure of O-Rings to contain the immense pressure of combustion within the rocket.

The complicated issue of causation

The answer to the question “Why did the Challenger Fail?” or its corollary question, “Why did Christa McAuliffe die?” is complicated, since no single cause can be isolated.

Several causes can be named, some distant, some immediate, some precipitating.
Among them:

A most unlikely explanation

One explanation very rarely heard is that the Challenger failed because of the way Romans decided to build their horse-drawn carts when Rome ruled most of the known world and could establish a global standard. 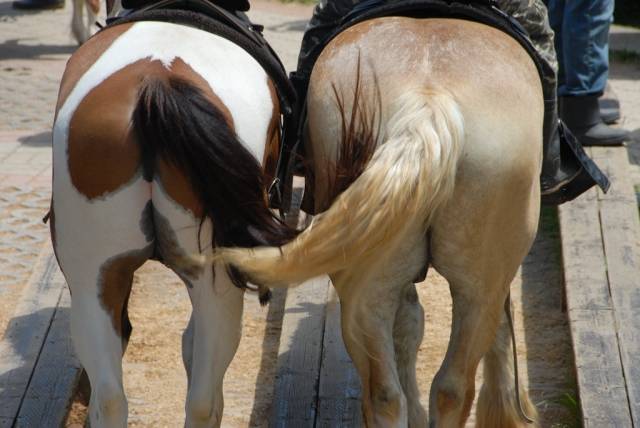 Roman war chariots were built with wheels spaced 4 feet, 8-1/2 inches apart. The apparently arbitrary width was determined to be the width of two war horses’ rear ends yoked side by side to the chariot. The standard assured that horses would not pull a too-wide wagon through any opening wide enough only for them.

Before long, the much traveled and justly famous Roman roads developed deep grooves at the established separation, discouraging any other wheel spacings.

As England was part of the Roman Empire, English carts came to adopt the Roman standard to take advantage of the path of least resistance established by the ruts carved by Roman chariots.

When railroads first began to replace horse-drawn carts as the preferred mode of transportation for long journeys, the same cartwrights using the same patterns and tools as they used for carts, passed on the standard wheel spacing with which they were already familiar. By 1850, the 4 feet, 8-1/2 inch spacing had become known as the “standard guage” for railroad cars throughout the British Empire, including India, where the connection between Chariots and Railroads is obvious in the photo above.

Early railroads in America naturally adopted the odd but increasingly accepted English “standard gauge” as well. As more track was laid in England and America, deviation from the standard was a costly and foolish error for any investor in a new train line. 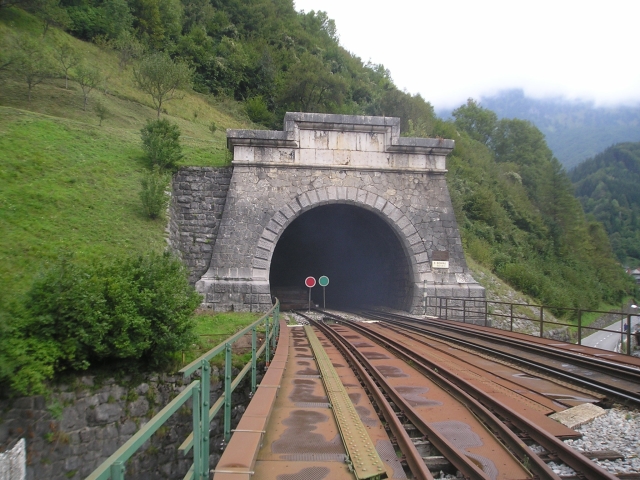 Tunnels were carved through mountains no wider than necessary to accommodate two trains passing one another, which limited not only the width but also the height of the cars or their cargo. The width of two Roman warhorse rear ends had come to dominate the widths of roads, then rails, then railcars, then tunnels, then what could be hauled in one piece by train through the mountains.

The solid rocket boosters that propelled many successful shuttle launches into space are enormous structures, as you can see by comparing them to the trucks following the shuttle conveyor to the launch pad.

When NASA awarded the contract for the design and construction of those boosters to the Morton-Thiokol Corporation of Utah, the die was cast for catastrophe. The boosters could have been built as a solid single piece, but those segments would never have made it through the tunnels they would have to have traversed through the Rocky Mountains on their way to the Kennedy Space Center in Florida.

So, they were built in sections, shipped in pieces, assembled in Florida, and wrapped by the now-infamous rubber O-Rings that failed so catastrophically on the day of the Challenger disaster.

Why did Christa McAuliffe die? Because of the width of a horse’s ass.

Reply below what this demonstration taught you about Causal Arguments.

Inventor of and sole practitioner of 299-word Very Short Novels. www.davidbdale.wordpress.com
View all posts by davidbdale →
This entry was posted in davidbdale, Lectures. Bookmark the permalink.

27 Responses to Why the Challenger Exploded