Something from the Bar?

Something from the bar?

This has to be the lamest question ever uttered, and it’s uttered a million times a day in restaurants all over the world.

It might elicit an actual drink order from a customer who always wants the same refreshment before dinner, but for everyone else it causes hesitation, confusion, reluctance, panic.

We don’t know what you have, how it’s priced, whether your bartender is frugal or licentious, which of the countless ways you might want to take advantage of us is in play . . . .

In other words, it creates an environment precisely the opposite of what the server intended, which was to make the customer comfortable, appreciated, and catered to (in a word, spendy).

Here’s what your customer at Table 13 visualizes when you attack her with your demand that she order a drink: 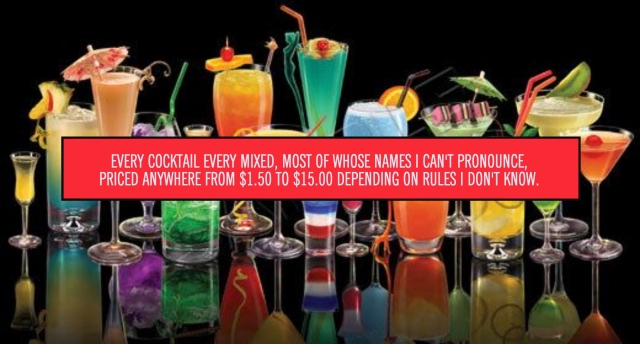 It’s no wonder that, when you make her select from this ridiculous array of alternatives—on a strict social deadline!—she panics in the moment and says the only safe thing: “I’ll stick with water.”

And you wonder why you don’t get bigger tips!

Hint to the metaphor: Readers do the same thing. Faced with too much new data or too many choices—in absence of clear guidance—they retreat to their bunkers where you can’t begin to persuade them.

You don’t understand your job, which is to serve, and by serving to guide, and by guiding to sell, and by selling to improve your employer’s bottom line, and—by helping out absolutely everybody—to take home bigger tips from happier customers whose enjoyment has been lubricated by expensive cocktails.

The best servers use their power to their advantage.

And when I say “servers” I mean “writers.” You understand this is an extended metaphor, right?

How to serve; how to write; they come down to the same set of rules. Stay in charge of the subject matter; approach it like the expert you are; guide your reader (diner) to the right conclusion.

One of the images below demonstrates the right way to offer up appetizers. The other is the way we write too often without even knowing we’re doing it.

NOTHING is accomplished if I tell you “We have a wonderful assortment of delicious appetizers; what do you want?”

But if I extend to you a limited sampling of carefully selected delicacies (by which I mean data and evidence because we’re still talking about writing, remember?) and stand there smiling, offering by my benevolent presence to guide you through the options with pleasant but persistent patience, then we pretty much both understand you’re going to order one of these little beauties . . . probably the one on which the house earns the biggest markup.

Lessons from the Server

Do I really have to do this, or do you get it? 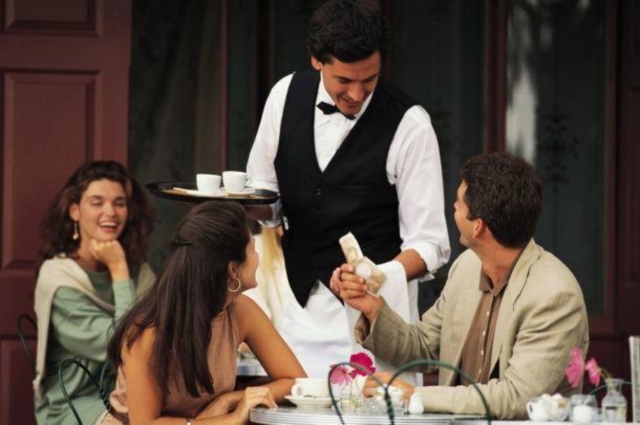 You collect the big tip for introducing him to guilt-free sausage. He goes home with his utterly infatuated date who has no idea what she’s in for, and you—with your obvious command of the data—attract the attention of the stunning brunette with the dangling earrings and those magnificent teeth.

For sticklers keeping score: Yes. You win twice. But it cost you a semester and he only had to pay the check. Fair’s fair.

If this is exactly like the advice you’ve received in every other writing class you’ve taken, I’d love to hear about your earlier experiences.

If, on the other hand, it’s a fresh way to consider the task of crafting an academic essay, well, I’d love to hear that too.

12 Responses to Something from the Bar?